Constellation is member of

one of the largest executive
search firms in the world 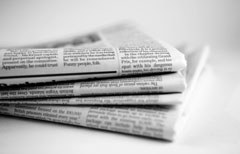 We are very pleased that we successfully finished an important search project, introducing Petr Dvorak (ex Global Brand Manager Pilsner Urquell, SAB London) as a new CEO of Budweiser Budvar. Many thanks to the whole team that was involved in this highly visible search!

Constellation participated on October 9-10, 2017 at an annual World Executive Search Congress in London. Coming GDPR regulation, future of executive search and diversity hiring were among the most discussed topics at this conference

The Case for Phased Retirement

In the same way that flexibility has come to the workplace — where, when and how we work — so, too, has arrived the age of the tailor-made retirement. Phased retirements, bridge jobs, “un-retirement” and second and third acts have caught on. Workers are demanding it, and firms have good cause to accommodate the idea that work does not one day simply stop.

Ivan Boroš has become a new partner in Constellation Executive Search. Prior to joining the company, Ivan worked in senior management positions in marketing and communication of multinational companies like DHL Express, SAP and Cinergy Global Resources. In the last five years, he worked as a private investor in the field of e-commerce and technology start-ups. He gained management experience back in 1990´s as the director of external and internal communication of the company Vítkovice a.s. From 2005 to 2009 he served as an elected Vice president of the Czech Golf Federation. Constellation is one of the leading companies on the Czech market in executive search – direct search of candidates for top management positions. From Prague headquarters, partners and consultants of the company manage projects in countries of Central Europe. Constellation is a member of Tinzon Group, a prestigious global alliance of independent consulting firms in executive search.

ON WORK: The corporate recruitment process is upside down - By Lucy Kellaway

ON THE same day last month my daughter and I each got up, put on our best clothes and went off to be interviewed for different jobs.

Job candidates have under 7 minutes to make an impression

Holding eye contact, a firm handshake and the way a candidate has applied their makeup are all significant factors in the six minutes and 25 seconds that job candidates have to impress a perspective employer during an interview.

A growing body of research indicates that emotional intelligence is a powerful predictor of job performance.A meta-analysis by researchers from Virginia Commonwealth University, published in 2010 by the Journal of Organizational Behavior, found that emotionally intelligent people make better workers.Daniel Goleman, the psychologist who helped introduce EQ to the masses with his 1995 book, Emotional Intelligence: Why It Can Matter More Than IQ, whichspent more than a year on the New York Times bestseller list, has also written extensively about the subject.

Can Envy Be a Virtue?

he writer Gore Vidal once described “envy” as “the central fact of American life.” And the workplace, he might have added. Among the seven deadly sins – which also include wrath, avarice, sloth, pride, lust and gluttony – envy has been labeled the most joyless, widespread and destructive. Yet this emotion – loosely defined as resentment of an advantage that another person has, often coupled with a desire to take that advantage and/or harm the person who possesses it — is also the hardest to pin down, at least within organizations.

Analyzing Effective Leaders: Why Extraverts Are Not Always the Most Successful Bosses

Conventional wisdom tells us that leaders are the men and women who stand up, speak out, give orders, make plans and are generally the most dominant, outgoing people in a group. But that is not always the case, according to new research on leadership and group dynamics from Wharton management professor Adam Grant and two colleagues, who challenge the assumption that the most effective leaders are extraverts.

New data from the worldwide professional association for the retained executive search industry has shown that senior executive hiring increased on a yearly basis.

The 'Silver Tsunami': Why Older Workers Offer Better Value Than Younger Ones

Just a decade ago, experts warned of labor shortages in the United States and other countries as the baby boomers marched into retirement en masse. But with an aging population facing the prospect of living for decades on shrunken retirement funds, graying individuals plan to keep on working. Published: December 06, 2010 in Knowledge@Wharton

Family businesses are one of the fastest growing sectors of the economy and merit serious consideration for executives at large publicly traded companies. This represents an amazing turnaround from 30 years ago when nobody wanted to work for a family-owned business.

With improving corporate profits underscoring signs of increased economic growth, recruiters are forecasting an increase in hiring activity at the executive-level, according to the latest ExecuNet Recruiter Confidence Index (RCI) data released today.

Do Tomorrow's Leaders Have What It Takes? Research Says No

A glaring gap exists between the leadership skills organizations have now and the ones they will need in five years, according to new research from the Center for Creative Leadership (CCL).